When talking about Climate Neutrality, the Cities of TOMORROW speak the same language

For a whole week, Brașov has been the scene of the Green Cities Forum, an event the city has developed believing in the carbon-free future the world needs to leave as legacy to the next generations.

Green Cities Forum welcomed an International Conference on Environmental Public Policies, from 9 to 12 September, as well as community events to promote and advance the green transition, to educate, inform and raise awareness, from 6 to 12 September.

Supported by Covenant of Mayors Europe and Energy Cities, ABMEE - Brașov Local Energy Management Agency hosted a satellite event dedicated to the Covenant of Mayors, during which the City of Brașov signed a new pledge committing to reach ambitious targets, revealing the results obtained after 10 years of SEAP implementation, announcing the local vision for 2030 and the urge to reach climate neutrality by 2050.

“Our energy & climate targets need to be translated into clear and tangible objectives and actions. We will only achieve climate-neutrality globally by involving Mayors”  Mr. Allen COLIBAN, Mayor of Brașov opening the conference.

The satellite event included a political exchange between Brest Metropole, Valencia and Brașov, pilot cities of the TOMORROW project. The Cities of TOMORROW joined forces to inspire other local and regional authorities across Europe, by providing useful information about future steps towards carbon neutrality, by sharing successful experiences as well as obstacles and ways to avoid them, by showing the higher standards they set (and how to reach them) to improve their communities’ quality of life .

Mr. Joan RIBO CANUT, Mayor of Valencia: "We don't only aim to build liveable, but also desirable cities, where people can live better lives. Valencia tries to rethink the city from 6 perspectives and hopes to become a healthy, sustainable, fair, prosper & creative Mediterranean city by 2030.”

TOMORROW political exchange unveiled essential stages all local communities must go through towards an inclusive, fairer and carbon-free Europe.

"2050 is around the corner and the social demand for climate action is growing quickly. Our political vision is clear: we have to lead the transition towards low-carbon, resilient & more liveable cities", said Mr. Glen DISSAUX, Vice-President Brest Metropole.

It also added important puzzle pieces in the context of Europe’s courageous key objective - reaching climate neutrality - emphasizing the necessity of cities unifying for the fight against climate crisis, for building together a brighter future where policies are developed around and with the engagement of citizens, all for the good of the next generations.

"The latest IPCC report is clear: we’re not doing well and fast enough. The Mediterranean region is vulnerable in this respect, we already see the effects of climate changes today! Cities don’t only have to become climate neutral; they have to do so as quickly as possible" warns Mr. Joan RIBO CANUT, Mayor of Valencia.

TOMORROW political exchange proved there is no other way to achieve these goals without a leading role of cities!

“Projects such as TOMORROW are great places to exchange good practices, experiences and get inspiration from frontrunner cities such as Valencia”, said Mr. Glen DISSAUX, Vice-President Brest Metropole. Mr. Allen COLIBAN, Mayor of Brașov added: "It gives us the tools to reach the climate targets that we set ourselves for 2030 & 2050." 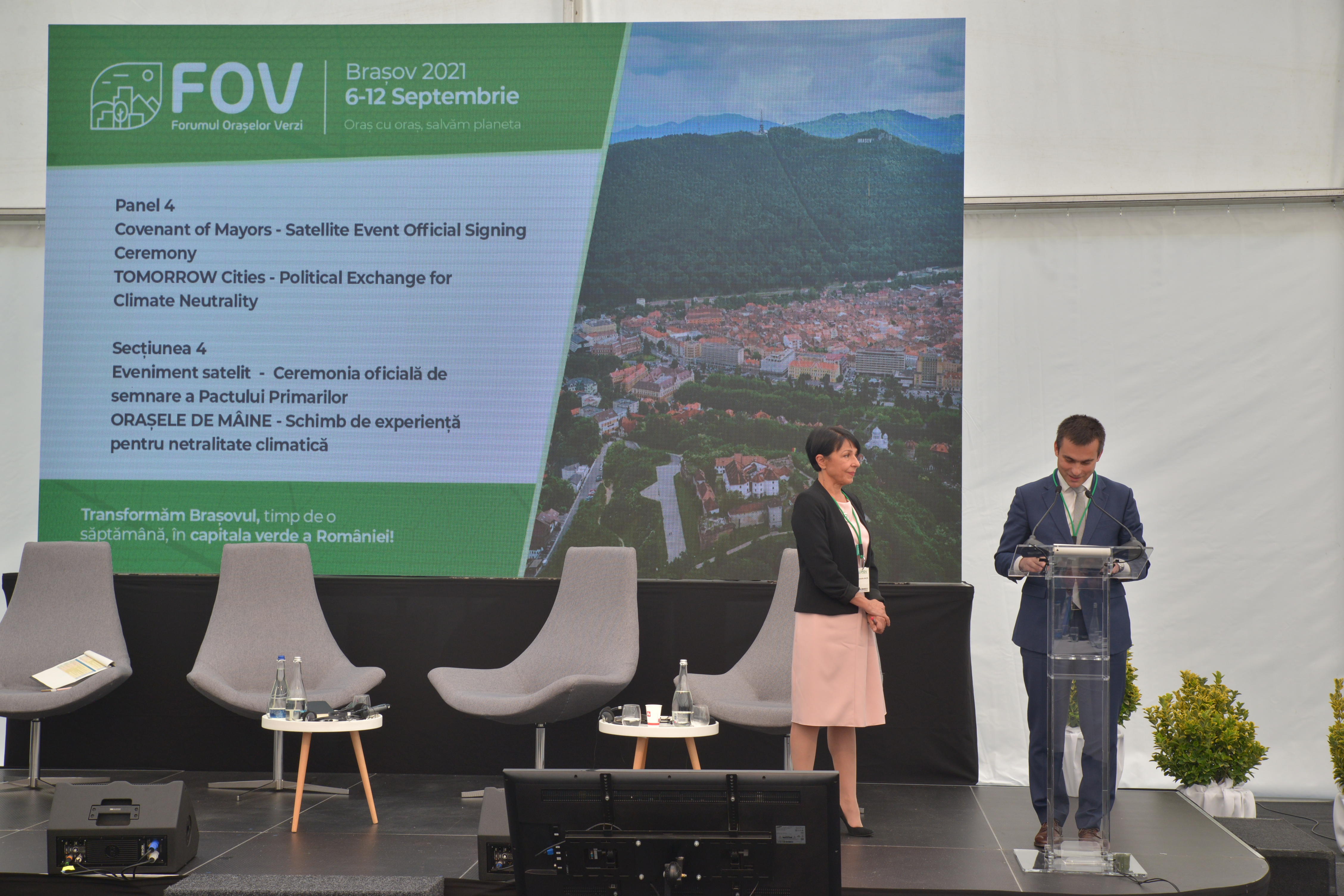 During the political conference, each of the local representatives shared some of the actions they are implementing to become greener and more liveable.

Brest: “When thinking to the objectives of the Paris Agreement and European Union, cities are at the frontline. While we agree on the need to take radical action right now, the policies implemented today may produce only long-term effects. Therefore, the strategies we develop (Sustainable Energy & Climate Action Plan - SECAP, TOMORROW roadmap towards carbon neutrality) are essential. We have identified 13 sectors of intervention, like energy efficiency, energy savings, solar energy, buildings, sustainable mobility, waste reuse. As a coastal city, we also need to address the issues generated by the rising level of the sea.

Our role, as a public authority, is to support, promote, make possible all initiatives and experiment innovative governance. Citizens must be at the centre of decisions taken by the mayor's office, even if it is difficult to take concrete action. They want to get involved in transforming their city in terms of climate and energy. We cannot reach the targets without the massive collaboration of all local actors.

We presented last month a new call for projects allowing to financially support energy transition initiatives led by associations or inhabitants. The goal is to really make it easy for anyone to be helped and to get some money for a positive project. TOMORROW is an opportunity for networking and change of experiences with other cities dealing with same difficulties and we see that we are in political consensus with Valencia and Brașov. Also, TOMORROW helps engage local actors and facilitates this approach through the tools made available to us.”

Valencia: “The 2030 places the climate changes issue at the centre of the political agenda and calls for reduction of the energy consumption, climate protection and equity for all. We need to reduce the emissions as soon as possible to prevent critical health situations, such as the ones appearing due to excessive heat. Cities need to become climate neutral as soon as possible. Mediterranean cities are very vulnerable, and climate change has made its presence felt through hot tropical nights, drought and wildfires. We need to have green islands in the cities and shading of buildings to avoid overheating. We have to develop a fair, pleasant and a prosperous city where the energy transition is implemented for the benefit of citizens through innovative solutions for the policies that are to be implemented. Valencia is recognized as an example city for innovation in the EU.

The EU must be climate neutral by 2030, ahead of the global targets for 2050 in an innovative way. An additional step for Valencia in the fight against climate change is SECAP. Valencia wants to be a leader in the EU in the fight against climate change based on dialogue with all local actors to identify innovative measures. The plan was presented to the Local Council and was approved by a majority of votes. The SECAP strategic plan, transversal in various areas, and climate neutrality policies are made for and together with the citizens.”

Brașov: “The issue of climate change is a cross-cutting domain and has to be present in any local policy because everything we do has an impact on local emissions. In Brasov, we invited real estate developers to dialogue about sustainable urban developments. We need to extend our green spaces, thus we started an opportunity study for new parks which will be submitted to public debate, as we consider former industrial platforms could be a good location. We constantly work to make public transport more attractive, green and a true solution for everyone. This is why we work on a project for a metropolitan train. We are developing a master plan for the cycling infrastructure of Brașov which will be publicly debated at the end of November. Concerning the parking spaces, we are now checking availability and costs in every neighbourhood. Regarding green acquisitions, we consider purchasing only clean energy. For the urban farms, we will make available land in neighbouring areas to those interested in promoting sustainable food and educating future generations.

In order to deliver valuable results, we all need to participate. It is important to emphasize that citizens are open to be involved in the necessary actions to tackle climate changes. Besides the tools received through TOMORROW project for local energy and climate planning, we are also part of a team formed of cities with similar ambitions that offer valuable exchanges. At local level, we have a framework within which the roadmap to climate neutrality is being developed - a transition team supporting us in identifying innovative key actions. We have public consultations on the proposed measures, with elements that can be quantified in CO2. In order to achieve climate neutrality, the engagement of civil society, private sector & academia is essential. The municipality will implement energy efficiency in all public services (public buildings, public lighting, public transport, heating, waste management, urban planning, green spaces), but climate neutrality requires education, awareness, accountability and a joint effort of the entire local community."